**I'm re-posting this yummy dish for November.....just in time for you to consider serving it for Thanksgiving!***


I make this dish for Thanksgiving every year. I love it! I had to take a picture of these humungo sweet potatoes. It only took two to make this whole dish they were so big. And actually when I was buying them the check out lady said some people were refusing to buy them because they were sure they were pumped up with fertilizers or nuclear waste or something. I bought them anyway. But, last week I had some beautiful organic yams delivered (yes, I recently signed up for produce delivery....it's wonderful and organic), so this dish would be wonderful with them. 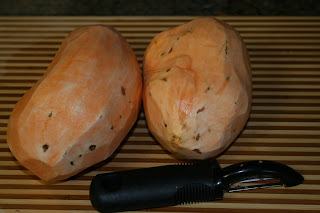 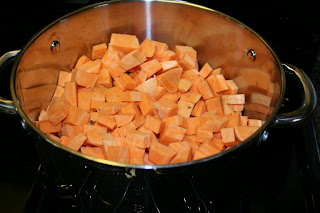 Then I used this fantastic vanilla from Mexico that my friend gave me. Oh my! It is soooo good and so different from what you can get in the super market or even Costco (which is what I usually use). 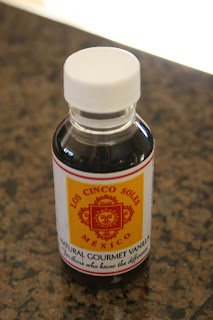 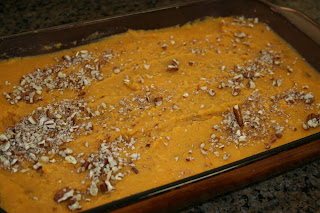 And I guess I didn't take a picture of the finished product, but here it is (with the recipe) courtesy of Cooking Light. 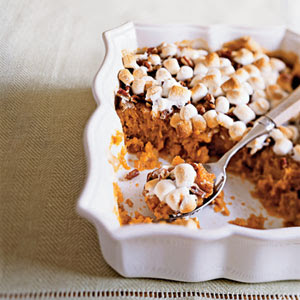 Hi guys! Thanks for the little break last week! We had a fabulous time visiting our family in NJ. It will be non-negotiable every year....we must visit the north in October in order to revel in the Fall colors!

I started crocheting this apron (called Tessa) found on Oh My Good Knits: 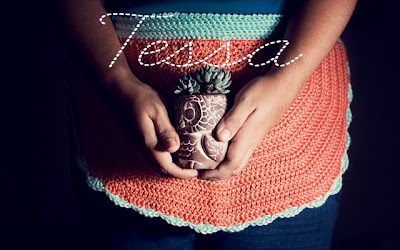 This is how far I've gotten: 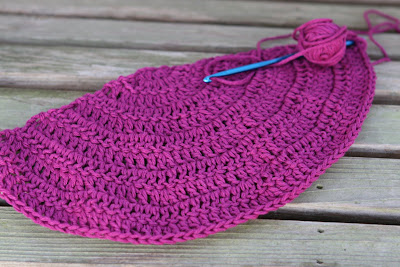 My girls got their ears pierced a couple of months ago. I think the reason they really wanted to do it was so they could have one of these cool earring holders! One of their little friends has one and they wanted one exactly like it!

We went to the thrift store and picked out some frames that could stand a coat of paint.

I removed the innards and got ready to staple in some mesh screen material. My husband had to buy some shorter staples....you'd think that this would maybe be a little CUE in my head to be careful where I stapled. But no! I stapled into the thinnest part of the frame, the staples pushed through and shattered the wood all to bits.

What's a crafter to do when their child is looking at them like, "I can't believe you just did that!"

Well, said crafter takes a look around the craft room and sees an embroidery hoop and thinks, "adapt and overcome!" Enter.....my version of the earring holder (it's probably been done....but I haven't seen it). 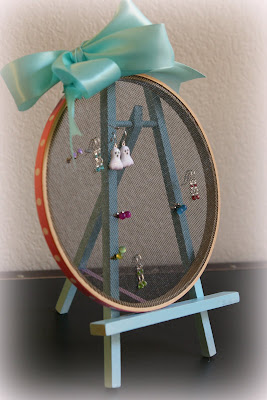 I took the hoop, pressed in the screen, and ran a nice ribbon around the perimeter. Then, tied a big bow on top. The frame holders came from IKEA, unpainted, so they got a nice coat of spray paint. 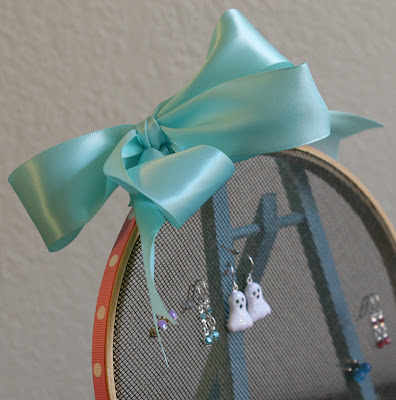 I liked this version better than where I was headed with the picture frame, but of course, one of my kids didn't. Paige said she loved this one, so it's hers. Madison wanted the original picture frame idea so Daddy got to work with the wood putty and another coat of paint. 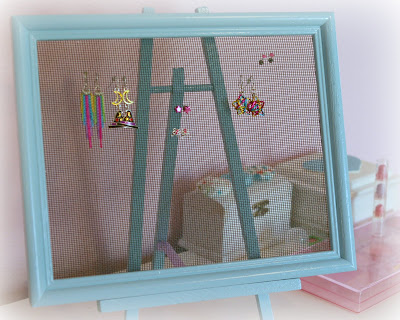 We're now all set with two pretty earring holders!
Posted by Beth at 4:46 PM No comments:

How on earth have I not ever posted this one? I don't even have a picture because when I made it the other night, I thought for sure it was something I had posted before so surely I'd have a picture. Evidently not.

This is a favorite of mine. From Parenting Magazine.

3. Meanwhile, in a large bowl, whisk eggs, egg whites, and water until frothy. Stir in cheddar, salt, and pepper.

4. Put bacon strips on top of apples. Pour egg mixture into skillet. Cook 2 minutes, until bottom and sides of frittata are set. (Resist the urge to stir!) Carefully transfer skillet to broiler and cook 6 inches from heat, 2 to 3 minutes, or until top is set. Cut into wedges.

Happy Meatless Monday!!
Posted by Beth at 3:25 PM No comments:

This week's Fibers on Friday is EARLY because I'm beyond excited to show you the MULTNOMAH SHAWL in it's entirety!! Plus I haven't posted in a week! Blame it on the Daisy's again :-)

So welcome! It's great to have you here. Won't you join us in showing off your knit or crocheted or otherwise fiber related project?

Without further ado, here she is: 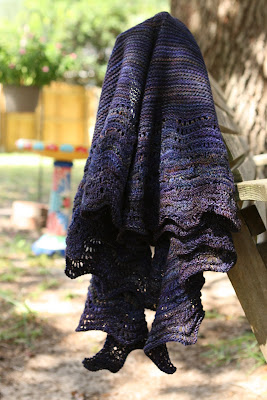 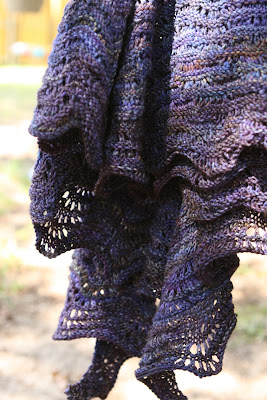 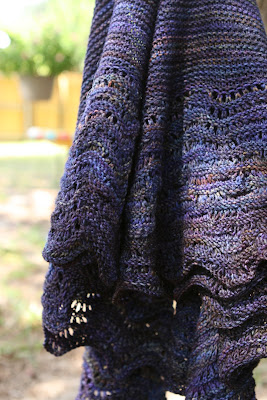 Isn't she lovely? Isn't she wonderful? This project was pretty exciting to cast off from because the beauty was hidden on the needles that whole time. The ripples, the ridges, the fanning....all scrunched up and secretive because they won't let themselves known until they're freed from the needles. And then....they're still being shy until they take a nice bath and then a nice massage onto the blocking towel. Not until all that do they break out and scream.....'Hello!! Aren't I beautiful?!'

Mercy this was such a pleasant project!! Completed just in the nick of time, too, because next weekend I'm heading up to NJ and I'll be able to give this to my Mom. Yes!

Fibers on Friday: An Invitation

Hi everyone! Welcome to Fibers on Friday, a link party dedicated to knitting, crocheting, sewing, or anything else fiber related.

This week I was really hoping to be able to show you my finished Multnomah Shawl. I honestly saw no reason why I wouldn't finish it. BUT....I didn't :-( I have volunteered to be a Daisy Troop Leader and I am a bit surprised at how much time the start-up is requiring. So......

Instead of showing you the same shawl as last week, I'd like to invite you to read about the latest Craft Hope Project, Sock Monkeys for Texas!!

I am totally doing this project with my new Daisy Troop! And if you guys want to participate, I'll dedicate a Fibers on Friday in November to showing off our sock monkeys! The project deadline is Thanksgiving, so we have plenty of time to make some monkeys and we'll show them off in a few weeks! Let's do it! And of course, I'll show you what we come up with in Daisies! 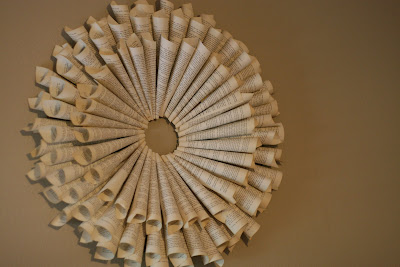 One of the very first things I pinned on Pinterest was the Book Page Wreath, from Vintage Violet Style. I kept my eye out for the perfect book to use and finally came upon one at a yard sale for 25 cents. I liked the book I chose because it was a little brown around the edges of the pages and there was that gold, shimmery, ink on the very edges of the pages. Perfect for this project!

So, the tutorial is very nicely laid out on the website I linked above. What I would emphasize is this: 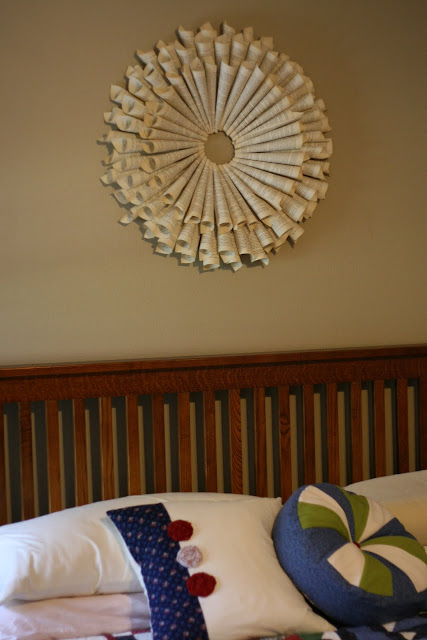 I absolutely LOVE how this wreath looks hanging over my bed. I highly recommend this project if you're in need of covering a wall!
Posted by Beth at 5:17 PM No comments: 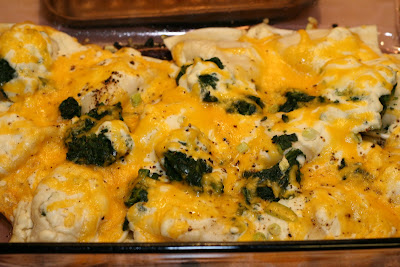 Oh this was GOOD! The other night I had something bigger planned for dinner and I just wasn't feeling it. I knew I had a box of pierogies and I remembered my cousin feeding us a yummy, easy pierogie bake while we visited her. So, a quick search through her food blog, Savoring Earth's Flavors, and here's what I came up with.