It's all about banners, is it not? Honestly, when I first started noticing how many bloggers were making them and posting about them, I really didn't get it. But, now that I have a Valentine's Banner and this Shamrock Banner under my belt, I have to say I'm diggin' them. It's a really cute way to decorate a mantel, or in my case this ledge that separates our living room from dining room. 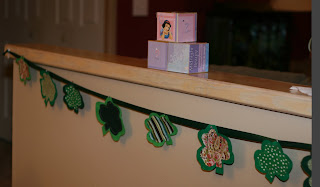 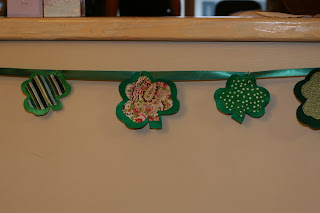 I fully intended on fastening these shamrocks to the ribbon with decorated clothes pins, but they were too heavy and just flopped over. So, I went with safety pins instead. 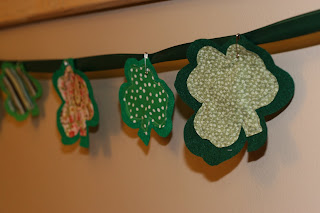 Edited to add this button. Come see all the other St. Patty's Day ideas at Somewhat Simple!

You'll recall last week I had these swatches completed and was set to cast on for this adorable Baby Doll Tank project.

I started it, but didn't like how it looked (too loose). So, I went to my favorite yarn shop and bought new yarn. So here's the start of this project in light purple. 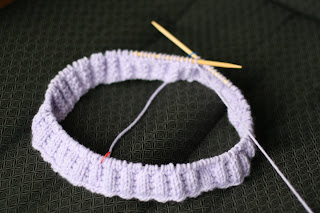 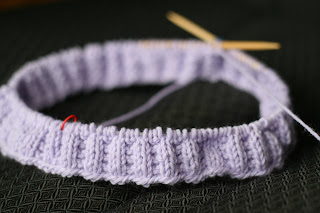 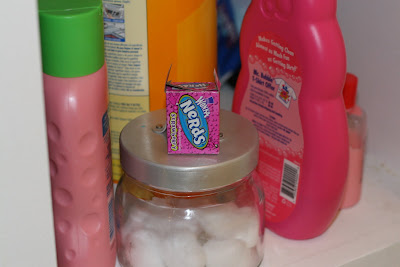 (I found this candy stashed under the girls' bathroom sink! Rascals!)
For more WW, visit 5 Minutes for Mom
Posted by Beth at 7:34 AM 5 comments:

I feel like I'm running out of meatless ideas that have been tried by me and are worth posting. Because, while most of our meals are meatless, some recipes are just easy ones like spaghetti or peirogies, or eggs. I'm going to come up with some new ones soon, but in the meantime here's a salad that my kids made. Their first very own salad. 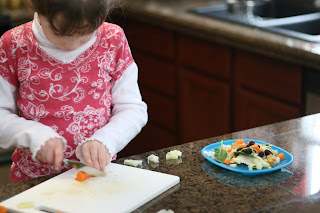 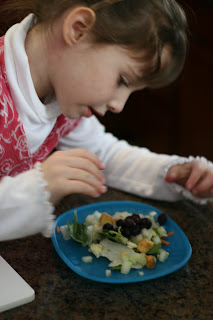 (Yes, frozen Blueberries were a part of this salad!) 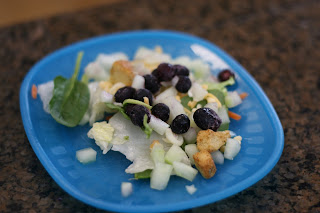 (Let it be known, I have NEVER told this girl to pose like this!) 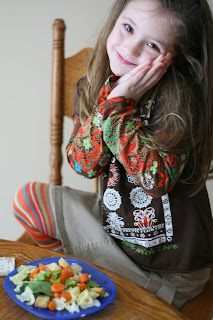 I saw this tutorial on a blog called Joy's Hope on how to make One Word Canvas Art. I thought it was so pretty, so I came up with these to hang over my girls' beds. 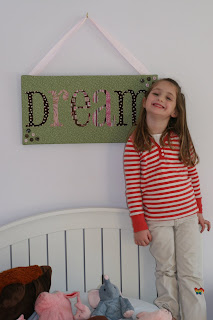 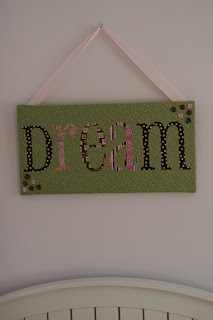 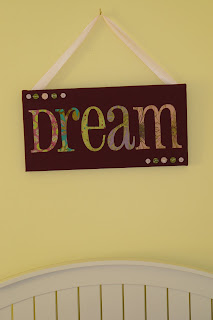 (The colors on this one are not accurate. The background is a solid purple and her walls are bright yellow) 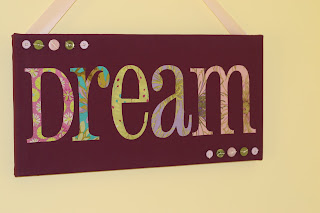 I followed her instructions to a T, right down to using the same font (called Pharmacy, available for download on DaFonts). I didn't sew around the edges of the letters because a) one of my kids threw a fit over the prospect b) I tried it on the second one for the more obliging kid and it just wasn't great, so I took it out.

I LOVE this project. I think it would be fitting in any number of settings; a Welcome sign, a Kitchen sign, a Coffee nook sign, a bathroom sign......I could go nuts! Maybe I will!
Posted by Beth at 7:50 AM 3 comments:

Let's see...my hat is complete! I love it, although it's a bit shallow. ALL of my hats are a bit shallow. Also, it's not the warmest hat due to the lace pattern across the brow, but that's OK. 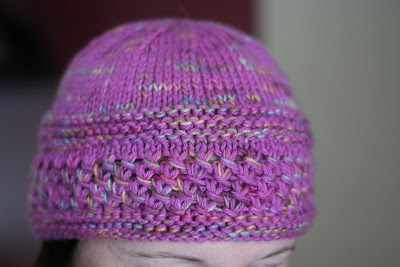 I started a Cowl last week (affectionately referred to as a "Gator Neck" by yours truly). But, I did not love it, so I frogged it.

These are the swatches for my next project: 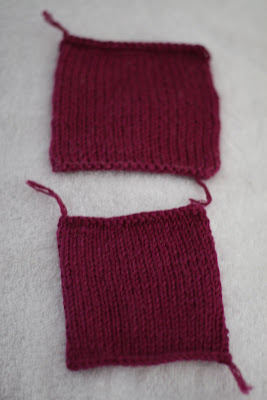 I'm going to make this Baby Doll Tank for my girls

Every knitting pattern says "To save time, take the time to check your gauge". That's what the swatches are for. The pattern called for US size 6 needles, but my swatch was too small. So, I knit another one with US size 7 needles. The second one is spot on for number of stitches per inch, but I have too many rows. Which brings me to what I've learned this week:

~When checking gauge, it's important to wash the swatch as you intend to wash the finished garment. Makes sense to account for shrinkage or stretching. Then take your measurements.

~Gauge is a measurement of not only stitches per inch knit across the piece, but also how many rows are knit within a designated piece. Since my gauge was a little big row-wise, I did a little research. I learned that stitches per inch is very important, but number of rows is generally not as important. And this is because patterns for a garment (such as a sweater) generally say "knit until the garment reaches X inches long" rather than "knit X amount of rows"....so that accounts for differing row measurements. However, this is not true for some patterns (such as those involving cables)! I will cross that bridge when I get to it!
Posted by Beth at 2:09 PM 2 comments:

They want their braided barrettes back!

Luckily, I aim to please. 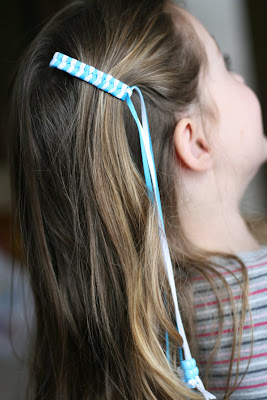 Aren't they such a throwback? Right up there with Swatch Watches and Leg Warmers! I'll be knitting a pair next! Just kidding.

These are a little tricky to get the hang of. The first one I made I started at the wrong end (start at the open end that clips). The second one went much faster and smoother. All you need is a couple double bar barrettes, some 1/8" grossgrain ribbon, and beads to weight down the ends.

But, if you have even a little touch of arthritis, be warned! These will get ya!

My grandfather used to always say, "You know those Ritis boys are trouble. And Arthur...he's the worst of them."

I was slaving over the first barrette one night last week. My darling husband looked at me and said, "I love that you're just not happy with a plain ol' barrette." 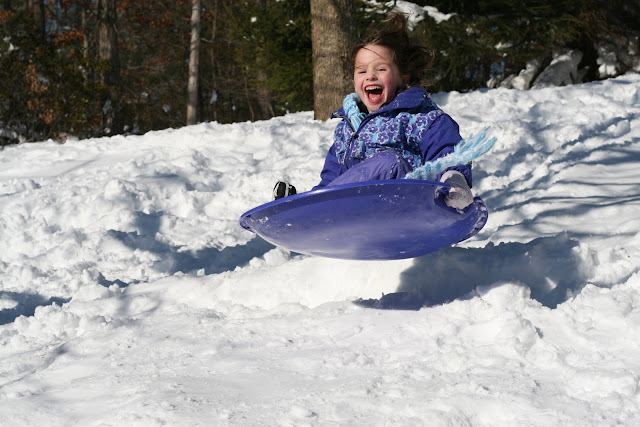 For more Wordless Wednesday, Visit 5 Minutes for Mom
Posted by Beth at 9:23 AM 8 comments: 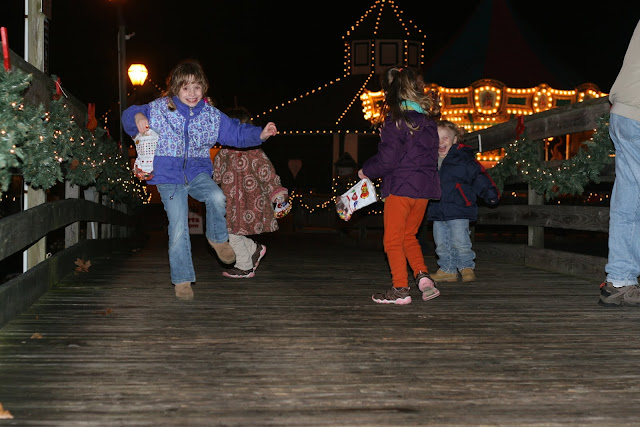 This week's challenge at I {heart} faces is I Wanna Dance. It took me about .09 seconds to think of the photo I'd post. It's not the best, but the memory of these kids breaking out to dance makes me smile.

It should be a fun week of dancing photos! Click the button to see more!

And this is sort of an anniversary for me, too! My VERY FIRST blog post was for Valentine's Day last year!

Check out last year's project here. I'm using the same mailboxes for treats for the girls this year, too. Except I have to fix some of my poor crafting from last year first! Boy I've learned a lot this year.....and all from other bloggers!

You'll notice I was late with the Valentine's inspiration last year, too! ooops! And actually I have no new inspiration for you this year and that 's because I've been busy SKIING this week!

Yup, just learned how to ski! It was so fun and I really enjoyed myself. Perhaps a Wordless Wednesday post pertaining to my skiing is in order :-)

So, no pictures today....just checking in to say Happy Valentine's Day and Happy Anniversary! Thank you for reading and following! A new friend, Ruthie, just introduced herself officially.....Hi, Ruthie! And I'd really like to know all of you who read this blog! If you have any questions about anything I post about, I'd be happy to help or at least point you in the right direction!

Ruthie, this is only my second winter of knitting anything but washcloths! So, I doubt my skillz are any better than yours! You can do these hats, too :-)
Posted by Beth at 8:05 PM No comments:

Fibers on Friday: A Hat for ME 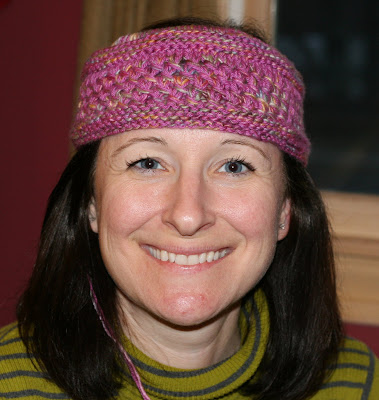 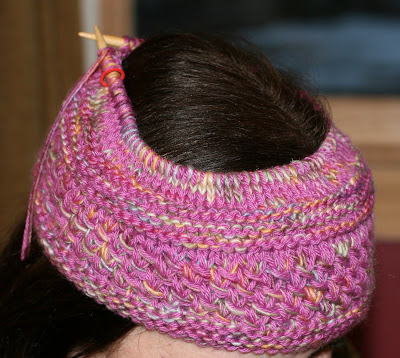 Finally! A hat for me! This pattern is called "The Amanda Hat". I'm really liking it and I've been able to learn yet ANOTHER thing about knitting this season: LACE! It's very pretty and pretty easy once you get the hang of it. It took me a little searching the internet to figure out what I was initially doing wrong. For posterity I will tell you (who knows who's interested but I'm always thinking of people who may stumble across this blog and need this info):

Part of the pattern is a YO (yarn over). I thought this was merely bringing the working yarn from the back to the front as if to purl. But in this pattern one actually has to WRAP the yarn around the right needle (from back to front) ending up with the working yarn in the back again as if to knit. Thereby creating an extra stitch in the form of a loop or a wrap. Once I learned that, I was good to go.

This pattern is nice and easy, but I wouldn't recommend using two strands of yarn held together as I'm doing....it gets a little too complicated in the lace pattern

BTW, my girls did a few of the stitches! They are very interested in knitting!
Posted by Beth at 6:03 PM 6 comments:

Wordless Wednesday: At the Museum 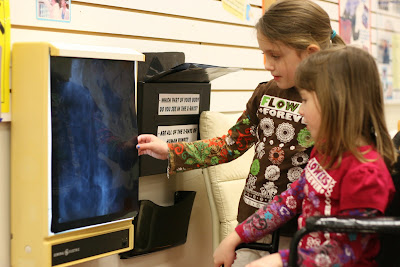 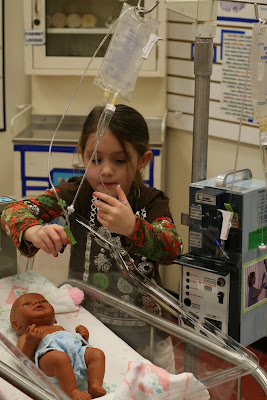 It's so hard to be 'wordless' when it comes to the things kids say. This baby was suffering from Acute "Digestive Bone-itis". The good news is, I think she'll recover!