A couple of recent cards

I made an anniversary card for my cousin and her husband at the beginning of the month. It was the first card I'd ever sewn on! Pretty cool. I always shy away from bustin' out the ol' sewing machine for paper crafting because it seems like so much hassle, but I was really happy with the results. The patterned paper is from Wild Asparagus, buttons and ribbons from PTI. This picture is a little washed out, zoom in to see the sewing. 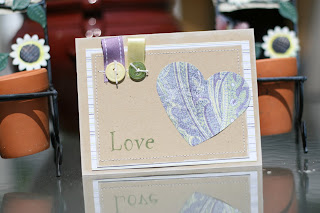 Since then, though, I came across a little portable crafting sewing machine at Tuesday Mornings. I picked it up with not very high expectations. It was $6.99, what did I have to lose? Well, I'm pretty happy with it, actually! It's LOUD! But, it works, so I'll be adding more sewing to my cards from now on.

And then I did this little card for a friend who had just undergone surgery. Just a little pick-me-up. The image is from Stamping Bella and I colored her in with copics. I also used my nestibilities and realized I'm missing some of the parts to make this die cutting machine work right. I bought it used from eBay, so I really was just peicing things together and trying to make it work, but it never cut all the way through. So, I did a little research on the Wizard website and ordered the peice I was missing, so we'll be back in business soon. 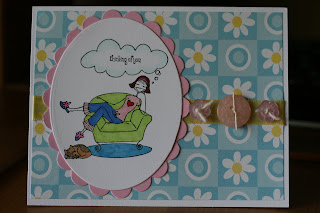 The other night I was surfing the 'net for fun crafts to do with my kids this summer. The Fourth of July is upon us, so I focused on patriotic crafts. I love doing festive t-shirts like these tie-dyed pumpkin shirts from last Halloween: 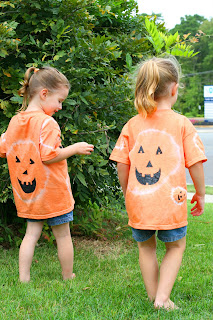 So I thought these would be fun. We only needed to buy the blue t-shirts because the red and white striped one was one we already had and it had a hole in it....so it was re-purposed! 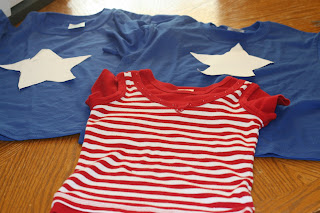 First we traced the star pattern with fabric chalk onto our shirts. The girls chose where they wanted it positioned. Madison chose to put it right over her heart....awwww. 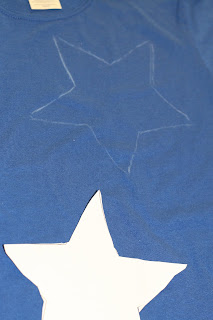 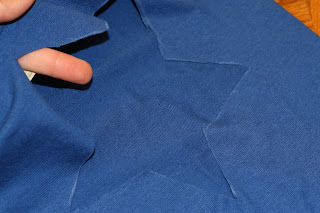 And pin a swatch of the red fabric to the inside: 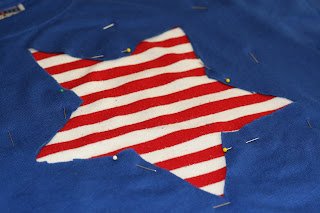 Next, sew around the star with white thread. I got fancy and used a star stitch setting on my machine, but you could easily sew this by hand using a running stitch. 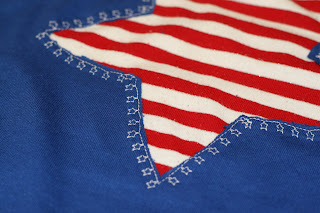 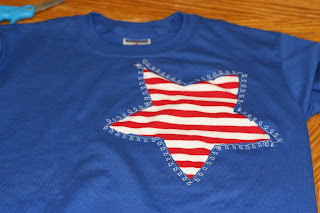 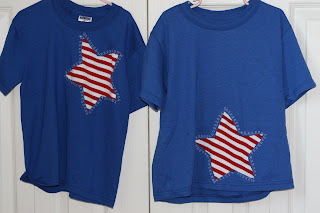 Both the Halloween and Patriotic shirt ideas came from Family Fun Magazine.

Wordless Wednesday : Then and Now....Fruitful 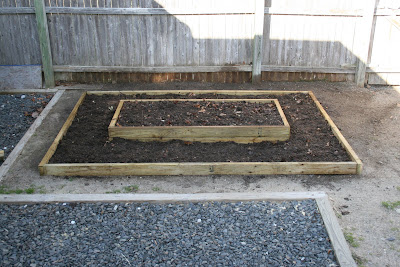 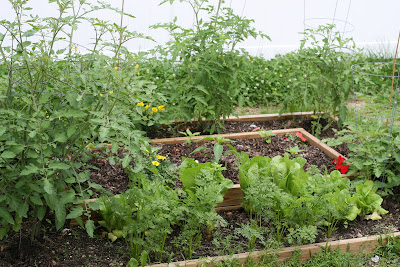 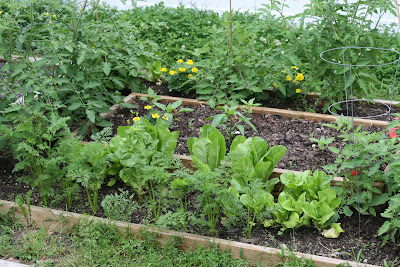 For more WW participants visit 5 minutes for Mom.
Posted by Beth at 11:45 AM 3 comments:

So for this week's CPS Challenge, I got my Father's Day cards completed! Last week's Fishy is intended for my Dad. The one I did today is for my husband from the girls. Here's the sketch to follow:

And here's my take: 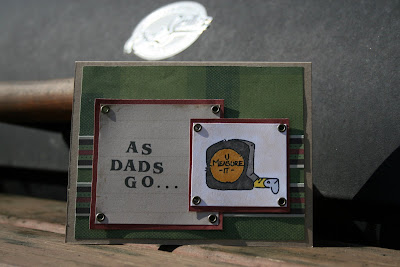 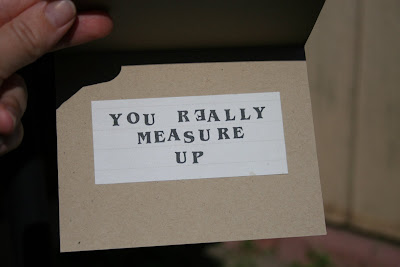 The patterned paper is from Close to My Heart. The measuring tape stamp is from my local stamp shop. I colored it in with copics and used chalk to shadow around it since I stamped it on white card stock. I added some eyelets just for the tool/gadget affect. All the words I stamped with individual letters from a cheapo set I have. I particularly like the backwards *e* on the inside of the card....my mistake, but it looks kid-like.

This week's challenge is a "two-for"...it's entered for CPS and also on this week's sponsor's site, 2 Red Bananas.
Posted by Beth at 4:53 PM 7 comments:

I made these nugget tins last week. One was for the girls' preschool teacher and the other for my sister for her birthday. What a super little project! The tins are from Paper Trey and so are the stamps for the labels. Standard address labels perfectly wrap a Hershey Nugget! And these stamps enable you to create endless combinations of sentiments. I think the yellow/red/green combo for the teacher was perfect! 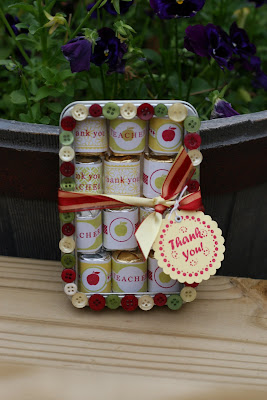 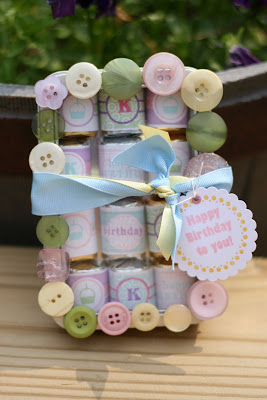 And I have to show you another super idea for a teacher's gift: Click here to see Bonnie's little flower pot.
Posted by Beth at 1:44 PM 2 comments:

Wow! So, I was down to the wire on last week's CPS card and now I have this week's on the very first day! So, you get back-to-back CPS challenges. I have a couple other cool things to show you later in the week.

And here's my take: 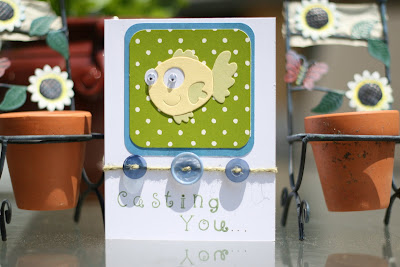 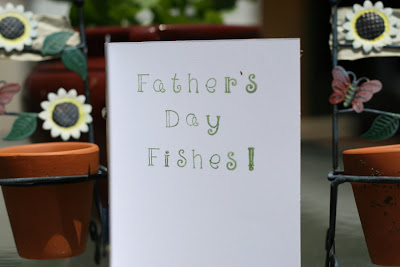 I just LOVE how it turned out! The fish is a Sizzix Die Cut I recently bought. I hadn't looked at dies in forever. But, a couple weeks ago this one (and a few others) caught my eye. I knew it would be good for Father's Day Fishes! Love how you can piece it together with different papers and the googly eyes are just plain FUN!
Posted by Beth at 7:29 PM 7 comments:

For this week's CPS Challenge I wanted to make a card for a dear friend of mine. She's very sick and it weighs heavy on my heart and mind every day. We do not live near one another, so for as long as I can, I will make her cards to hopefully brighten a part of her day. 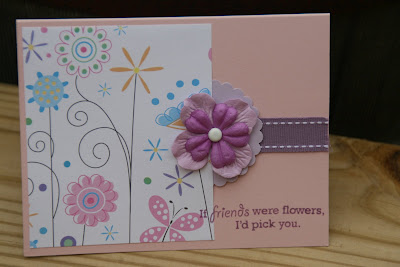 It's very simple, but I love it. The patterned paper came from the very first pack I ever bought! The sentiment is from PTI's Green Thumb (again, can you tell I don't have many stamp sets?) and the little flowers are ones my girls picked out the last time we were at the craft store. Ribbon is Plum Pudding, also from PTI.
Posted by Beth at 11:28 AM 4 comments:

This is going to be random and minimally crafty

An explanation for my Wordless Wednesday for Bonnie :-) This is the second time in our married life that we've had a glass door shatter! Both times it was caused by debris from mowing the lawn hitting it. On this occasion, I heard a weird sound while Bruce was mowing, but thought nothing of it. Later, when I went to check the mail, I opened the door and heard the sound of water being sprayed at me with a gushing for force. yeah, turns out, it was not water but glass....a million pieces of glass! Thankfully, I didn't open it all the way, because the glass just imploded at my feet. And THANKFULLY, it was not either one of the girls that opened it, because they wouldn't have paused at that sound.

On Tuesday we went Strawberry Picking for the first time. Ahhhhh, this lovely "Garden State" of NJ! 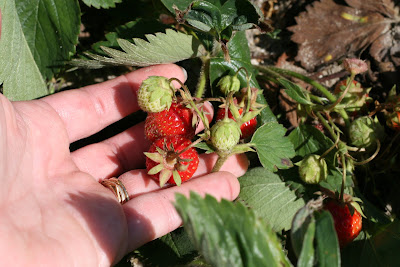 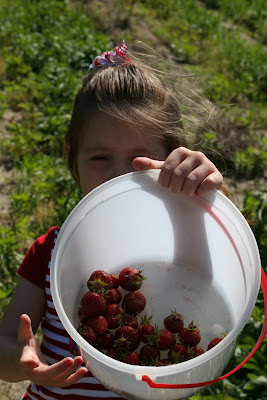 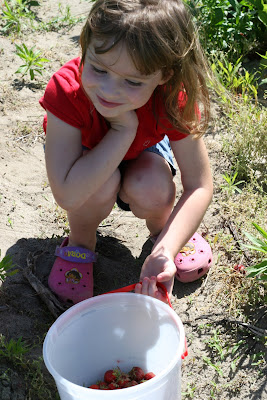 On Wednesday it was my Dad's 62nd Birthday. This is the coolest picture of him ever taken in 1968 in Vietnam: 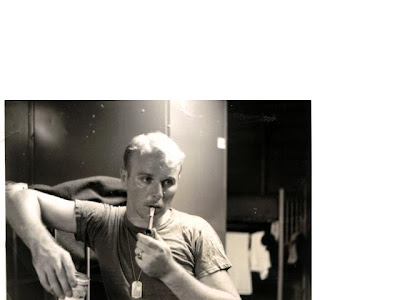 And here he is now in all his glory, surrounded by his kids and Grandkids who obviously mean the world to him: 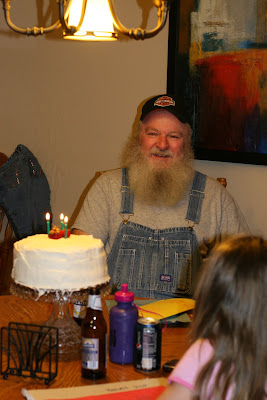 Not to ever be without his bib over-alls!

And here's the Strawberry Shortcake Cake, with fresh-picked Strawberries, in all its glory baked for said birthday: 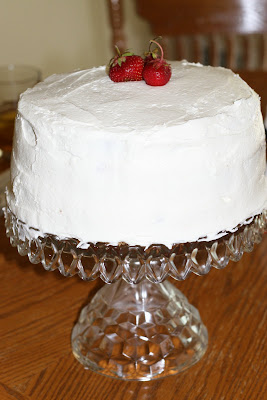 Isn't she purdee? It's a recipe from Pioneer Woman, if you're interested. It was divine. And I think it looks extra decadent perched upon this cake plate from my Mimi.

Thanks for visiting! Have a wonderful day!
Posted by Beth at 8:58 AM 4 comments: 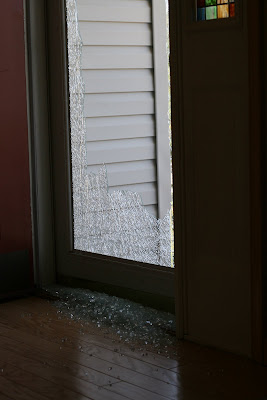 For more WW Participants, visit 5 Minutes for Mom
Posted by Beth at 8:51 AM 5 comments: